The general manager of the Metropolitan Opera has circulated the following bruised-ego letter, with attachments, to his board, complaining about an essentially pro-Met article:

Dear Fellow Members of the Board,
As you know, The New Yorker recently ran a lengthy article about the Met that unfortunately contained many inaccuracies. In response, we’ve sent the following letter to The New Yorker, which was also read aloud at the most recent Board meeting of March 19th.  If you have questions, we would be happy to answer them. 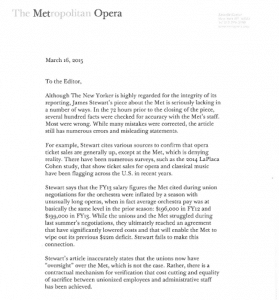 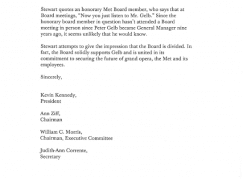 (If you cannot read the small print, the letter is fully transcribed here).Our favourite passage reads:

‘Stewart attempts to give the impression that the Board is divided. In fact, the Board solidly supports Gelb and is united in its commitment to securing the future of grand opera, the Met and its employees.’We assume the letter will appear in the next issue of the New Yorker.