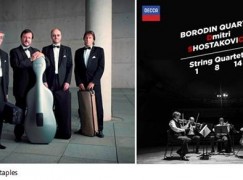 Decca have signed the Borodin Quartet to record the Shostakovich cycle of 15. That’s bold. Thee Borodins have been around with various players for 70 years. Press release follows:

Celebrating a milestone 70th anniversary year, the world-leading Borodin Quartet has signed to Decca Classics for a major series of recordings of the music of Shostakovich.

The centrepiece of this landmark season will be the composer’s complete works for string quartet – starting with the release of String Quartets 1, 8 and 14, plus the Two Pieces for String Quartet (Elegy and Polka) on 23 March.

This album will launch a comprehensive series of recordings that will include Shostakovich’s String Quartets 1–15, the String Quartet Movement in E flat major (“Unfinished Quartet”), the Piano Quintet in G minor, op.57, and Podrugi (“Girlfriends”) for string quartet, trumpet and piano. All the recordings will be made in high-definition 24bit/96kHz.

No quartet performs Russian repertoire better than the authoritative players of the Borodin Quartet – Shostakovich himself personally supervised the ensemble’s study of each of his quartets and a profound understanding of his music has been passed down through the generations.

“The Borodin Quartet is probably the world’s oldest quartet, and though the personnel has inevitably changed, its sound and style remain unique. In 1962 Decca made its first commercial recording in the West and now we are delighted to announce its first complete digital Shostakovich cycle. Thanks to the composer’s personal involvement with the original players, the Borodins’ performances of his work are still unrivalled in both their authority and their intensity.”

« All change ahead at the top of British arts