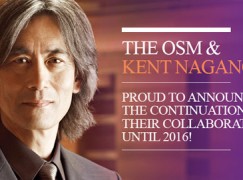 At a time when all labels have shed their longterm deals with orchestra, Decca has popped up with a five-year partnership in Montreal. Yes, we understand he sentimental attachment to the so-called golden years when every score that Charles Dutoit beat was released on CD.

But the deal starting losing money in the early 1990s and Kent Nagano, Dutoit’s successor, does not sell records.

Montreal, Thursday, March 19, 2015 – The Orchestre symphonique de Montréal is pleased to announce a five-year partnership agreement with Decca Classics, a prestigious label on which the Orchestra recorded about 80 albums from the beginning of the 1980s to the early 2000s. The OSM wished to share this happy development on the occasion its 2015-2016 season launch.

“We at the OSM are delighted to reunite with our historic partner and look forward to the special artistic projects which will result of this collaboration,” stated Kent Nagano, music director.

“We’re very happy to be re-signing with the prestigious international record label Decca, with whom we were highly active in the recording market for over 20 years. Even though the industry has undergone upheavals and the OSM itself has diversified the ways in which it supplies its music to audiences, our desire is to continue to make recordings that enable the Orchestra to maintain its international celebrity has never faded,” stated Madeleine Careau, chief executive officer.

“It gives me great pleasure to see the return of the OSM to Decca, its recording home for so many years. Now in its magnificent new hall it is sounding back to its very best under the enterprising musical direction of Kent Nagano. The projects we have agreed, starting with L’Aiglon, add several world-premiere recordings to the catalogue, while maintaining the tradition of Francophone music that was so important during the Dutoit years. So all in all, this is a logical way to continue a much-cherished partnership,” commented Paul Moseley, Managing Director of Decca.

The relationship with Decca started in 1980 when the OSM signed an exclusive contract with the label. The OSM recordings, under the Decca label, won about 40 national and international prizes, including two Grammy Awards. The OSM is therefore particularly proud of returning to the label.

L’Aiglon: Son of Napoleon, a work by Honegger and Ibert, presented in a grand North American premiere on March 17, 19 and 21, 2015 at Maison symphonique de Montréal, is the first project in the new partnership. The second project, inspired by Halloween, with works by Ives, (Hallowe’en), Dukas, (The Sorcerer’s Apprentice), Dvořák, (The Noon Witch), Balakirev, (Tamara), Saint-Saëns, (Danse macabre), and Mussorgsky, (Night on Bald Mountain), was being announced today in the framework of the launch of the 2015-2016 OSM season.