Members of the Swiss Ukraine Association picketed Anna Netrebko at the Zurich Opera, where she appeared as Donizetti’s Anna Bolena. Leaflets were handed out to passersby proclaiming that taxpayers’ money should not be squandered on  what they called an ‘ambassador of hatred’.

Netrebko, who has backed President Putin’s military assault on Ukraine, is reported to be earning 80,000 Swiss francs over four performances.

Unnoticed by the demonstrators, her conductor at the Zurich Opera is the Ukrainian, Andriy Yurkevych. 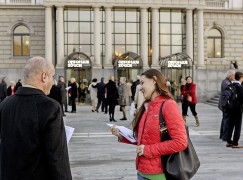