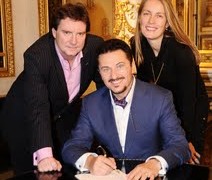 All change again at Deutsche Grammophon

Staff at the yellow label are being told this morning that label chief Mark Wilkinson is being moved to anotther role within the parent company, Universal Music, as Vice President International Strategy & Artist Development.

That leaves DG headless once more. Wilko has been in charge since the dismissal of Michael Lang in 2012. He has broguht two major pinaists to the label – Daniil Trifonov and Grigory Sokolov – but there were complaonts that DG was continuing to lose its core identity.

A search is now on for a new chief – almost certainly Austro-German – who will raise the label’s heartland profile at a time of great change in German music, with both Berlin and Munich appointing new conductors. Press release below.

This new role follows Stainer’s appointment as President of Global Classics last November. Based out of Universal Music’s Global Classics headquarters in London and reporting to Stainer, as VP International Strategy & Artist Development Wilkinson will spearhead the commercial development of new partners to extend the global reach and success of classical artists and classical music. He will work on projects with UMG’s roster of classical superstars and new artists as well as driving opportunities to expose people around the world to the rich and historic catalogues of Universal Music’s Deutsche Grammophon and Decca labels.

Wilkinson has been President of Deutsche Grammophon since 2012 and he will continue to oversee the day-to-day operations of the company in Berlin until a successor is appointed by Frank Briegmann and Dickon Stainer.

Dickon Stainer said: “I’m delighted that Mark is taking up this new role which sits right at the very heart of our new global strategy for classical music. Mark is one of the most experienced classical executives in the world with a record of developing and nurturing artists of the highest calibre and in this new role he will be a huge asset in strengthening our global footprint for classical music.

“Together with Frank Briegmann we will find the best possible next leader for Deutsche Grammophon, someone who knows and understands the unique culture of this most legendary of labels.”

Frank Briegmann said: “I want to thank Mark for the great work he has done for Deutsche Grammophon over the past few years. He has strengthened our core repertoire, brought new crossover ideas and successfully integrated the teams at Deutsche Grammophon and Universal Music Classics Germany. Together we have made a number of strategic changes which the label will benefit from going forward such as innovative digital distribution channels and I’m looking forward to continuing to work with him in the future. I want to congratulate Mark on his new appointment and wish him the best of luck and success and I have no doubt that he will continue to play an important role for Deutsche Grammophon and its fantastic artists.”

Mark Wilkinson (pictured with Piotr Beczala, above) said: “I’d like to thank Dickon for asking me to join his global team in this new role.  It’s a genuine honour to have been part of Frank’s team at Deutsche Grammophon and I look forward to continuing to work with Universal Music’s distinguished roster of artists and committed executives around the world.”

« In the land of nut rage, the orchestra is now at risk