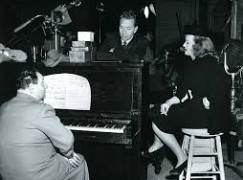 Who we’ll be remembering on Oscars night

The violinist Daniel Hope has written a touching piece today for the Wall Street Journal on Hollywood’s forgotten souls, the Hitler musician exiles who found refuge beneath an alien sun. Daniel has written a book about them (out this summer) and tells us he wants to make a film.

A composer who had once been a student of Ravel’s might find himself writing a Viennese waltz one minute, a cowboy song or a Can-Can the next.

Eric Zeisl, a forgotten master and one of the youngest of the émigré composers, received no screen credits for the two-dozen feature films he scored. He died at age 53, far too young, but not before completing several concertos, four ballets and some stunning chamber works.

Neither Schoenberg nor Zeisl could deal with the studio ethos. Composers had to deliver fast, and invariably their music would be reorchestrated, chopped up or even discarded.