E. Randol Schoenberg (left) is an L. A. lawyer who specialises in the restitution of art works stolen by the Nazis. The grandson of an immortal composer, his greatest legal triumph – the recovery of a pillaged Klimt – is retold in a forthcoming film, Woman in Gold, starring Helen Mirren.

Schoenberg’s courtroom opponent was Dr Dreimann, an Austrian state attorney. Dreimann is played in the film by Justus von Dohnanyi (right), great-grandson of an important composer and son of the German conductor, Christoph von Dohnanyi. Christoph is a noted Schoenberg interpreter. 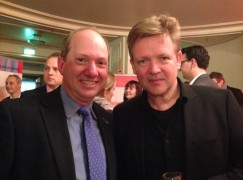