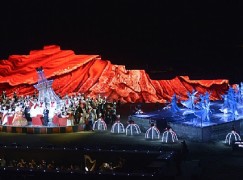 We have recoiled before at the annual junket by Israel Opera to Masada, a desert mountaintop where defeated Jewish warriors in the first century chose martyrdom rather than Roman enslavement.

It is regarded by many Jews as a holy burial site, unfit for public entertainment.

The Israel Opera has performed at the foot of the mountain for the past four years – insensitively, in our view.

Today it has announced a staging of Carl Orff’s Carmina Burana, Nazi Germany’s first musical masterpiece, a work riddled with pagan mythology and moral nihilism – ”the kind of clear, stormy, and yet always disciplined music that our time requires’, according to Josef Goebbels.

It is perfectly legitimate for Orff’s work to be performed in Israel. But not at Masada, a massacre site reminiscent of Nazi violations.

The Israel Opera has a cloth ear for audience and artist sensitivities. It does not respond to reasoned objection.

So now is the time to make your protest known.

« Munich decision is ‘a severe blow’ for classical music

‘The worst composer in the world’ (by Boulez’s teacher) »