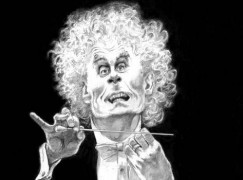 We understand that a leading PR firm has been commissioned to press the case for a new concert hall in the east of London. The LSO and Barbican are for it, as well as the broadsheet print media. But the political response has been total silence.

A full Rattle programme with the LSO is in place for next year. As pre-marital relationships go, this is pretty heavy petting:

Just in: A Russian singer is added to EU sanctions list »