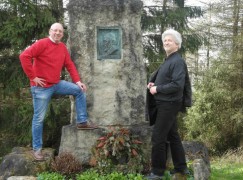 (Almost) the only German at the Grammys

Burkhard Schmilgun and his CPO label, based in bucolic Osnabrück, were not just first-time winners in Hollywood: they are being celebrated in home-country media as the only German label to get a sniff of Grammy glory.

Their Charpentier album took the opera Grammy. How did they win it?

‘I knew nothing about the jury, or what went on behind the scenes,’ confesses Burkhard (pictured left). Read here (auf Deutsch).

UPDATE: Hilary Hahn won. She was on DG. Er, what does the D stand for… ?

« Mourning for an American composer, aged 82