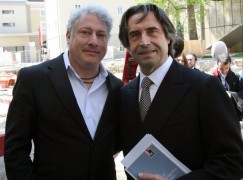 We are mortified to learn of the death of Andrew Patner, Chicago broadcaster and music critic for the Sun-Times. His station WFMT has just issued this statement:

It is with a profound sense of sadness, sorry and shock that we must announce that our dear friend and colleague, Andrew Patner, passed away this morning after a very brief battle with a bacterial infection that overwhelmed his body. The news came to us from Tom Bachtell, Andrew’s long-time partner who said, “Our Andrew is no more.” Andrew’s voice, keen intelligence and great spirit will be sorely missed at this radio station, which was part of his professional life for many years. Our thoughts and prayers go out to Tom and to Andrew’s family. When details about services are announced we will provide them to you. Rest in peace dear friend. Your many contributions to WFMT and to this community will never be forgotten. -Steve Robinson, General Manager 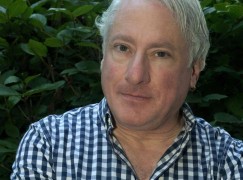 I met Andrew in Salzburg in 2008 or thereabouts and we bonded instantly. We were in regular contact on social media, on the same side in most important issues. He was a generous colleague with a lively sense of humour. He and I both got on well with Riccardo Muti. I am speechless at his loss. My deep sympathies to Tom and his family.

Andrew was 55. He learned his trade on Capitol Hill before moving into the choppier waters of cultural politics. He’ll be terribly missed.

Andrew Patner has been Critic-at-Large for 98.7 WFMT Radio Chicago and its website WFMT.com since 1998. On WFMT, he hosts the weekly conversation program CRITICAL THINKING and his “Critic’s Choice” commentaries are heard three times each week. For WFMT and the Chicago Sun-Times, Andrew Patner has accompanied the Chicago Symphony Orchestra on its last 17 tours — to Europe, the East Coast, Japan, and South America. He has been Contributing Critic to the Chicago Sun-Times since 1991, covering classical music and opera, theater and dance, art and architecture, cabaret, books, and film, including one year as acting theater and dance critic, and is currently acting classical music and opera critic. He appears as a commentator on cultural and political matters for WTTW 11 television, WFMT’s sister station.

A third-generation Chicagoan, Andrew is the author of I.F. STONE: A PORTRAIT (Pantheon, 1988; Anchor Books, 1990) on the veteran independent radical journalist, he received a Peter Lisagor Award in 1984 for his coverage of race and politics in Chicago magazine (staff writer and editor, 1981-1983) on the eve of Harold Washington’s election as the city’s first black mayor, and the 2000 James Friend Memorial Award from the Friends of Literature for his written and broadcast arts criticism in Chicago. A former staff reporter for The Wall Street Journal (1989 and 1990), he was a critic, host, and producer for WBEZ (91.5 FM), Chicago’s National Public Radio affiliate, from 1990 to 1997, and he was a 2003 Getty/USC Annenberg Arts Journalism Fellow in Los Angeles.

A lifelong Hyde Parker, Andrew was born at Michael Reese Hospital on December 17, 1959, the son of Irene Patner and the late attorney and activist Marshall Patner, and attended Hyde Park Union Nursery School, Ancona Montessori School, William H. Ray Elementary, and Kenwood High School, where he was editor-in-chief of the Kenwood Kaleidoscope. After working as a staff assistant to the late Congressman Ralph H. Metcalfe in Washington, D.C., he attended The College of The University of Chicago where he studied liberal arts and history and was editor-in-chief of The Chicago Maroon in 1979-1980. He later attended The University of Wisconsin at Madison from which he holds a B.A. in History — Thesis of Distinction (1985), and The University of Chicago Law School from which he emerged relatively unscathed but with no degree.

A member of the Music Critics Association of North America (MCANA), the Authors Guild, Inc., a charter member of the Association of Literary Scholars and Critics, and a founding member of the Chicago Art Critics Association, he has been a member of the executive committee of the American Theater Critics Association (ATCA). He was the first director of the Program on Arts Policy at Columbia College Chicago and was also a director of the Minority High School Summer Journalism Camp at Roosevelt University in Chicago. He taught students from 19 nations for The Soros Foundations/Open Society Institute for three summers in Prague and Budapest in the early 1990s. He was co-chair of the Interarts Council of The Arts Club of Chicago for nine years and is a member of the Visiting Committee to the Department of Music of The University of Chicago by appointment of the University’s board of trustees. He has been a board member at one time or another of KAM Isaiah Israel Congregation, where he became bar mitzvah and where he later taught religious school for two years, the Chicago Children’s Choir, and the Independent Voters of Illinois, elected to the last of these when he was not yet old enough to vote.

A popular speaker, lecturer, and moderator, he has appeared at all of Chicago’s major cultural institutions, including the Chicago Symphony Orchestra, where he is a regular pre-concert speaker and interviewer, Lyric Opera of Chicago, the Art Institute of Chicago, the Field Museum of Natural History, Chicago Opera Theater, Steppenwolf Theatre Company, the Chicago Humanities Festival, the Chicago Historical Society, The University of Chicago, Ravinia Festival, the Chicago Public Library/Harold Washington Library Center, Printers Row Book Fair, and the Chicago Cultural Center. He also is a frequent speaker, panelist, or master of ceremonies for charitable, educational, and fraternal organizations including Urban Gateways: The Center for Arts in Education, Rotary International, Chicago Youth Symphony Orchestra, and many area churches and synagogues. He lectures on modern and contemporary music each year at the Ris Ìr Chamber Music Festival in RisÌr, Norway, and has lectured in Weimar, Germany, and other cities in Central and Eastern Europe, on architecture, emigration, and Jewish life. He is currently working on a book on five historians and writers on the Holocaust.