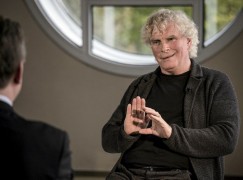 In a fascinating hourlong interview with Sibelius expert Vesa Siren, the Berlin Phil conductor describes the symphony that is least suited to his orchestra.

‘To do an accelerando at all with Berlin Philharmonic is really quite hard! It is a very heavy, Germanic truck that has it’s feet on the ground and part of what is extraordinary is how the sound comes out off the ground. And often with Sibelius, you have to really move. It is not that we can’t rush, because we can rush like hell particularly when we don’t want to. When it is necessary to get faster in a controlled way it is very difficult. It requires the same kind of trust as when you stand up and someone  says I will catch you when you fall. To actually do this accelerando without going off the rails requires an incredible amount of trust. I would say that fifth symphony this orchestra found the hardest, by far. The symphonies I found tremendously difficult with other orchestras – 4 and 6 – were absolutely no problem here at all. Berlin Phil knows about the sound and line and how to go through silences with the meaning. I look forward to work incredibly hard (with the fifth) — with enough time to work incredibly hard.’

Rattle goes on to discuss the Sibelius work of several other conductors. He runs through a critical discography. Watch the interview here.

Mahler’s greatest song is no longer lost to the world »