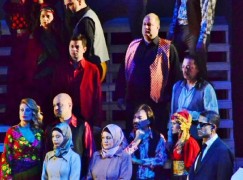 From a correspondent who wishes to remain anonymous:

A production of Rossini’s “Turco in Italia” at the Antalya State Opera features women in hijab on stage. The local anti-government media is calling it “Türban Opera.” 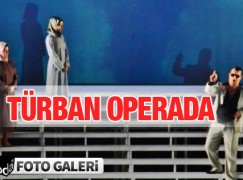 The appearance of the modern hijab on these non-singing women, beside men in singing roles that have been reinterpreted as “kiro” (low-brow thug) types, has drawn negative responses. A few audience members walked out when they saw the hijabs appearing in Act II, and others wrote their responses in a large visitor book in the lobby of the opera house. Messages like: “This has been adapted to the ‘New Turkey’;” “Is this how you describe a Turkish man or woman?” and “They have their dirty hands on it.” That last one refers to an assumption that the ruling party is starting to use opera as an ideological vehicle. 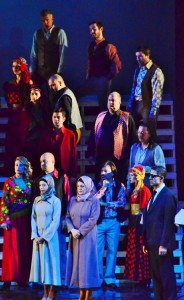 The modern ‘hijab’ in Turkey is a head scarf and an ankle-length cloth coat. Young people in Turkey call this “Emine Fashion” because it copies what is worn by Emine Erdogan, wife of President Recep Tayyip Erdogan. The headscarf that was worn during the Ottoman Empire, (when this opera was written) was apolitical and folkloric and not an Islamic convention. “New Turkey” is the term Pres. Erdogan has used to describe where he intends to “raise pious generations” after a clear separation of religion and state since 1923.It is clear, especially also after the recent conscription of Izmir’s Anadolu Philharmonic (a professional orchestra in Izmir, the most politically liberal of all Turkish cities) to play a musical tribute resembling those played for historical despots, for Prime Minister Davutoglu, that the “dirty hands” are again at work to push the ideological knife into the heart of western art forms in Turkey.

« Three queens and a Lulu; what’s new at the Met

What clears your ears in the morning? »