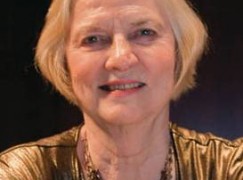 We have received news of the death of Anne Koscielny, who won a major Chopin contest in New York and received a medal of honour at the Warsaw competition. She had a far-flung performing career in chamber music, working with the Guarneri and Emerson quartets, among others. She was professor of music at The Hartt School of Music, University of Hartford; also at the University of Maryland at College Park and the Eastman School of Music.

The one man who can save ENO »