The rediscovery of Mieczyslaw Weinberg, the Moscow composer closest to Shostakovich, has been a slow, often frustrating process over the past two decades. It has involved scholars and performers in Sweden, Britain, Germany, Russia – a line of exploration across northern Europe that, for some reason, bypassed Poland.

Weinberg was Polish. Born in Warsaw, he fled to Russia when the Germans invaded in 1939. Most of his family perished in the Nazi Holocaust.

Now, at last, the Warsaw Philharmonic and their artistic director Jacek Kaspzyk have taken up the music in what promises to be an outstanding series on Warner Classics – the first such exposure on a ‘major’ label.

The opening release, out this month, contains the G-minor violin concerto, exquisitely played by Ilya Gringolts, and the breakthrough fourth symphony. Together, they were the first of Weinberg’s orchestral score to receive a public performance, by Kirill Kondrashin in 1961. The solo lines of the symphony express a heart-rending social isolation. To hear them played by soloists in a Warsaw orchestra sounds somehow more authentic than any I have yet experienced. The record arrived yesterday and I have already played it three times. 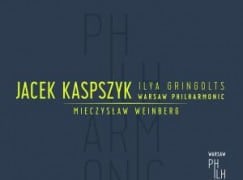 « Can an atheist play Messaien?