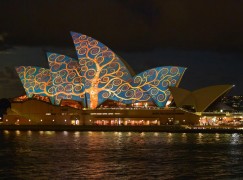 Orchestra gets plastered on roof of Sydney Opera House

This is Andrew Haveron, concertmaster of the Sydney Symphony Orchestra, projected last night out of his seat and displayed on the roof of the opera house. The event was a Visions of Vienna concert, promoted by the Austrian tourist authority, and it went down well with a crowd of thousands milling around the harbour, listening to the music and watching the images change. 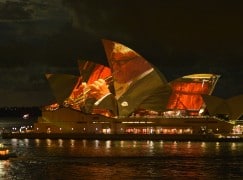 To spice up the Strausses, they added an occasional Klimt.

Tony David Cray, Head of Recording and Broadcast at the Sydney Opera House, used 14 cameras inside the Concert Hall – including five lipstick cameras inside the Orchestra – to film the performance, which was projected live on the sails by Technical Direction Company. More than 3,000 people attended a free public event hosted by the Vienna Tourist Board at Campbells Cove in the Rocks to watch the spectacle on the sails of the Sydney Opera House.