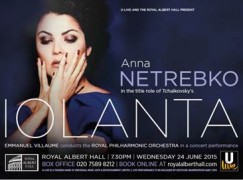 U-Live and the Royal Albert Hall are proud to announce a concert performance of Iolanta on 24 June 2015. In a rare appearance on one of London’s concert stages, renowned Russian soprano Anna Netrebko brings to life one of Pyotr Ilyich Tchaikovsky’s lesser known operas, a work full of irresistibly enchanting melodies.  Emmanuel Villaume will conduct the Royal Philharmonic Orchestra.

Anna Netrebko, the grande dame of bel canto, is recognised as one of the most outstanding sopranos gracing opera stages today. Adored by music lovers across the world for her voice and irresistible charm, Netrebko is no stranger to interpreting Iolanta, having first sung the role in 2009 in her native St. Petersburg.  Since then, she has performed it all over the world, including an 11-city tour in 2012.

Anna Netrebko opened the 2014-15 season of the Metropolitan Opera with a fully staged production of Iolanta and in January, Deutsche Grammophon released a live recording of the work to critical acclaim.

Iolanta, Op. 69, is a lyric opera in one act by Pyotr Ilyich Tchaikovsky that received its premiere on 18 December 1892 in St. Petersburg.  It tells the story of a blind princess whose deeply protective father, King René, has kept her oblivious to her lack of sight and her royal status.  But this fantasy world is about to be unveiled by the unforeseen arrival of Count Vaudémont, whose love for Iolanta does much more than bring to life new emotions in the young princess.