Mahler’s greatest song is no longer lost to the world

Stolen from Adler’s Vienna apartment in 1941 by a Nazi lawyer, it vanished for half a century until an Adler grandson, a US civil rights lawyer, tracked it down and sued for restitution. The manuscript was sold at auction and went once more into limbo.

This weekend, a facsimile will be presented to the world by the Kaplan Foundation in New York. It is a thing of beauty, a joy to behold. 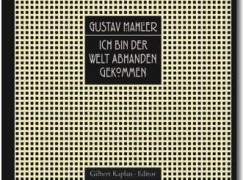 More musical material tracking Mahler’s composing is available for “Ich bin der Welt” than for any of his other songs. The 92 page Kaplan Edition (37 x 29 cm.) reproduces not only the lost manuscript of the version for orchestra but also the piano version, preliminary sketches as well as pages from a copy Alma Mahler made for the printer. Both the orchestra and piano versions as well as Alma’s copy are reproduced in their actual sizes. All these sources are analyzed in a comprehensive essay by Stephen Hefling, America’s leading Mahler scholar.

In addition to the facsimiles and commentary, there are three additional features:

–         A CD of two recordings sung by Dietrich Fischer-Dieskau, the acclaimed interpreter of Mahler’s lieder. Fischer-Dieskau is accompanied in the orchestra version by the Berlin Philharmonic, led by Karl Böhm, and in the piano version by Leonard Bernstein.

So “I am Lost to the World” is no longer lost. With the publication of this stunning facsimile edition, the surviving documents of its gestation and perfection are now available to scholars and music lovers. 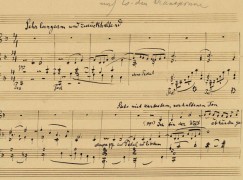 This facsimile edition of the autograph manuscripts of “Ich bin der Welt abhanden gekommen” is published by the Kaplan Foundation, which for more than 25 years has been a leader in Mahler research, publications, historical recordings, exhibitions, and symposia. The Foundation has published facsimile editions of Mahler’s autograph manuscript of the Second Symphony and of the Adagietto movement of the Fifth Symphony. It has produced Mahler Plays Mahler, a recording using piano rolls that Mahler made of his own compositions. These rolls are the only documents that exist of Mahler as a performer. The Foundation has also published Mahler Discography (together with editor Pèter Fülöp), a definitive guide to 2,774 recordings of Mahler’s music; Mahler’s Concerts, by Knud Martner, a compilation of the 323 known performances led by Mahler as a conductor or pianist; and The Mahler Album (editor Gilbert Kaplan), an award-winning illustrated biography containing all known photographs and a selection of drawings and sculptures of the composer. Together with Universal Edition, the Foundation is co-publisher of two scores of Mahler’s Second Symphony: the New Critical Edition (editors Renate Stark-Voit and Gilbert Kaplan) and the arrangement of the symphony for small orchestra (by Gilbert Kaplan and Rob Mathes); and with C. F. Peters, co-publisher of the New Critical Edition of Mahler’s Sixth Symphony.