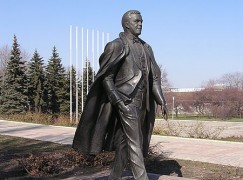 Just in: A Russian singer is added to EU sanctions list

The veteran crooner Joseph Kobzon, a popular purveyor of smooch for the past half-century, has been added to the EU sanctions list for his outspoken support for Russian actions against Ukraine, according to the Moscow Times.

Kobzon, 77, is a member of Russia’s lower house of parliament. Raised in a mining town near Donetsk (where a statue was erected to his fame, he was expelled from the  Communist Party in 1983 after singing Jewish songs at a Soviet-Arab friendship concert, causing several delegations to walk out in dismay.

He has used his wealth to found and support orphanages around the country.

Putting him under an EU travel ban is a petty act of bureaucracy that will only convince Russians of the West’s absurdity while more outspoken pro-Putin musicians are still free to roam the world.

This pianist has no forte »