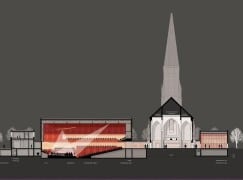 If Bochum and Birmingham can, why not Munich and London?

They’re laughing in Bochum this week.

A post-industrial Ruhr town with a populace of under 400,000 has built a brilliant new concert hall for 34 million Euros, while wealthy Munich has dithered away for ten years, spent a small fortune on consultants and finally balked at a priject that cost ten times as much as Bochum’s outlay. Eat this, Bayern, is what they’re saying in Bochum.

You’ll hear much the same sentiment expressed in Birmingham, where an exemplary concert hall was built as a relief to 1980s post-industrial blight and where locals glow with pride at the way the city punches above its cultural weight.

None of this will ultimately cut much inauguration tape in Munich and London. The timing, politicians are privately saying, is all wrong. You can get away with second-city projects in the thick of austerity, but capitals cannot be seen to swagger.

So no new hall for the moment.

UPDATE: We are told that Bochum’s General Music Director Steven Sloane fought for 20 years to get the Bochum Symphony a new home, in a hall that provides educational space and a home for many school ensembles.

« The pianist who lived in her car was half-Russian