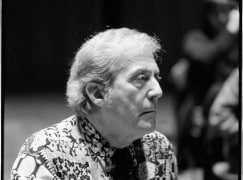 I was mesmerised by my teacher, Aldo Ciccolini…

The British pianist Mark Bebbington has sent us his memories of a phenomenal artist who encouraged him to pursue little-known repertoire. Aldo Ciccolini died this weekend at the age of 89.

I first met Aldo when I won a scholarship to study at the Ravel Academy in the south of France. Aldo was a regular summer school teacher  there. I was uncertain whether I would even have the chance to study with him but was immediately put in his class. I was the rank outsider, the class being mostly populated with his Paris Conservatoire students who knew what to expect. I was very much an Anglo-Saxon pianist with the Royal College of Music training (good though that was). I was completely mesmerised by him. By the colour, not only in his own playing but the colour that he encouraged from all of his students.

This emphasis on richness of dynamic range and colour was new to me. He would explore with us the most subtle nuances of a dynamic perspective within say the dynamic level of a piano or a pianissimo – the ranges of timbre possible within those two dynamics. It was incredible.

He would put great emphasis on touch and mechanism of arm and shoulders linked together and the way that created the sound world. There was huge focus on the maximum use of fingers. After the way he had studied at the masterclasses of Artur Schnabel and it was Schnabel’s way of teaching and thinking, of using weight – arm and shoulder and body weight – that evolved a way of playing and teaching for Aldo that to my mind combines the best of the French school with the best of that kind of Viennese German tradition. He was a rare master of all pianistic traditions. We think of him more as a French pianist, but it was rather to his chagrin that this kind of Saint-Saens piano concerto label dogged him – at times he would get annoyed at that, because he would be teaching, say, the late Schubert sonatas with an insight that was second to none. 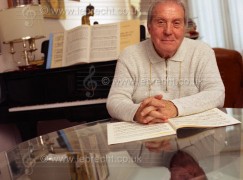 Imagination was everything to him. He always said that the most important sound was the sound he heart in his head before he actually created contact with the keyboard. So lessons with him were almost philosophical in nature.

Even though I was the outsider, confronted with this glamorous virtuoso pianist, yet Aldo recognised something in me and said that he would like me to come and study at a private academy he was starting in Italy. I would have moved heaven and earth to study with him for longer. The classes would alternate between French, Italian and English. And he could be formidable to those who didn’t do the work. He set the highest possible standards for himself and then inherently expected the best of his students. You would be expected for instance to learn a piece very fast, even if the period of the ingestion of the work would take longer, you had to know the notes. I never felt his disapproval because I always gave everything I had, but he taught according to the European Conservatoire tradition that you teach a class rather than a single student. So there could be 15 or 20 of us in the class and if any of our colleagues came below the standards he set, there would suddenly be a glacial half-hour.

He would always say that the score was the thing, and returning to the score would always reveal everything, but if he saw that a student had natural musical intelligence, he wanted them to follow their own lines of thinking. That’s an arduous way of teaching but he had the ability to bring it off. So all of his students are completely different kinds of pianists, there is no Aldo Ciccolini stamp immediately recognisable in their playing.

He loved to discuss language and literature. Italo Calvino was a great favourite of his, Umberto Eco he knew and admired. He loved novels that bordered on the surreal – Love in the Time of Cholera was a work that was much talked about. And in some ways that world of reality bordering on unreality was actually the world in which he lived, not least in his music.

He was rather fascinated by my move into exploring lesser-known Englsh music. These weren’t pieces that he knew, but he loved the idea. He would tell me how he had almost whimsically decided to record the music of Satie for EMI at a young age and that led to an explosion of interest in unusual French piano music and opened up a glittering career for him.

So he always thought that doing something similar in English music was a good idea for me. And he was very practical when it came to questions of what would sell. He would say, “The record industry does not need a Schubert sonata cycle from me, let alone from a young pianist!”

He became more than a teacher for me, he was a mentor. And it developed over time into a real friendship. He had an ongoing interest in everything that I did and was even gracious enough to make concert opportunities available to me in France whenever possible. He was such a great artist, such a marvellous teacher with such generosity of spirit and time. He was, in short, an astonishing man.

Mark performs a recital of 20th century rarities this Wednesday night, including music by a noted composer’s mistress, at London’s Central Synagogue. Details here. Aldo would have loved it.

« City Opera is dead. Keep it that way.

Eva-Maria gets her man »