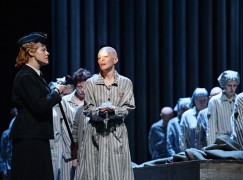 Productions are coming thick and fast for Mieczysław Weinberg’s opera, The Passenger. It opened to standing ovations and rave reviews in Chicago on Tuesday and has its next production in Frankfurt-am-Main on Sunday.

He will be substituted by a Frankfurt debutant,  Christoph Gedschold, who gave the opera its German premiere in Karlsruhe, back in 2013. The work is known in German by the feminine title, Die Passagierin.

She sang for Stravinsky »