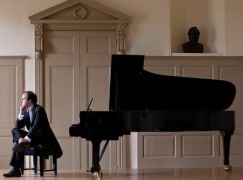 Gianluca Marcianò, the highly rated young Italian conductor, has walked out on the State Opera in Tbilisi, Georgia.

His team explain why, below.

1. Gianluca Marcianò arrived in Tbilisi to conduct a charity concert in April 2010. After an inspirational meeting with David Sakvarelidze (general manager of Tbilisi State Opera and Ballet) agreed to become music director and principal conductor. The project was to create an international opera hub for the entire ex-Soviet Union area which would become the bridge between east and west. Right now, the Georgian operatic school is leading in the world. Tbilisi State Opera Orchestra had wonderful tours in China, Italy, at Al Bustan Festival, in Estonia.

Georgia in 2010 was full of potential and perspective in many fields. Now, sadly, there is deep stagnation. David Sakvarelidze, was dismissed after an oligarch came into power. His dismissal was not the only politically motivated decision taken by the new government.

2.The law that regulates theaters in Georgia was changed. Under the new law, there is an artistic director with full power over opera and spoken theatre, and some committees (soviets). The Artistic Director in the Opera House, because of this law, is also Music Director. The last two artistic directors (Davit Kintsurashvili and Giorgi Jordania) are both conductors. They employed themselves as conductors in the theatre, which can create conflict with the principal conductor. The conflict between the former artistic director and Marcianò ended in a massive demonstration at the Ministry of Culture with a huge national media exposure, a kind of revolution which brought back some hope (for a little while).

Mr Kintsurashvili sent Marciano several emails to inform him that he took some strategic decisions which usually would need the approval of the principal conductor. Marciano was informed after the decisions were taken, like removing the leader of the orchestra from her position, planning auditions which would include principal players of the orchestra, changing the titles for next season and deciding at the last moment to cancel the agreement with a guest conductor (Alessandro Benigni) who was invited to perform Lucia di Lammermoor.

After all this, he was obviously very concerned. Being in Leeds, conducting La Traviata at Opera North, Marciano couldn’t go back to Tbilisi, but he was constantly in touch with musicians and singers. Just before his planned return, Marciano was informed that because of the Georgian law his position had been changed to Principal GUEST Conductor as he doesn’t spend enough time in Georgia.

He was given two options: a contract by performance  or a 1 year contract paid only for the days that he would spend in Georgia. The position of Principal Conductor in the theatre is not existing anymore and he would be in any case be Principal GUEST.  He accepted the first option , so that he could conduct a Rossini’s Stabat Mater and 2 concert performances of Lucia di Lammermoor till Jan 30 2015 and discuss with the management his role in the theatre for the future.

3. When he joined Tbilisi State Opera, under general manager Sakvarelidze, planning was done month by month while any artist’s or any theatre’s schedule in the world is at least 1, when not 2/3 years in advance. He was able to plan his work in Tbilisi very well, but now he can’t wait till the last moment when he is booked elsewhere. Marciano requested to tell how many performances per year  he should conduct as principal conductor but the answer was that they cannot say.

4. He tried to explain his concerns to the Minister of Culture, Mikheil Giorgadze, but never got a chance to meet him.  He mentioned to the Minister what should be done urgently for Opera and it is not done, but…… The above mentioned are  the reasons why Gianluca Marciano could not continue his relationship with Tbilisi State Opera. He will be back in Georgia to conduct a big concert which will celebrate Paata Burchuladze’s 60th birthday. Many Georgian  and international opera stars will sing and it will be the best possible farewell concert for him!

He would like to say that he loved being in Georgia and had wonderful time there, meeting wonderful artists, friends, colleagues. They wrote to him extraordinary moving messages after they heard about his decision and he is really happy.

He is hoping that one day the situation in Georgia will change, that the great plans, perspectives and projects which he found when he arrived in 2010 will be back. He hopes that the stagnation will end and it will be possible again to work properly. In that case he will be available for Tbilisi State Opera and Ballet and they will know how to find him. Until then he will continue to work elsewhere and enjoying music.