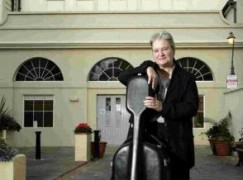 When the Hanover Band performs Bach’s St John Passion at St Andrew’s Holborn at the end of next month, all proceeds will go to London’s Royal Marsden Hospital, by order of the band’s founder Caroline Brown.

Caroline, a cellist, has been the Band’s artistic director for 35 years. In 2012, she began treatment for a rare cancer and underwent three invasive operations. During the third operation she was fitted with an external stoma bag, which meant she was unable to play the cello for three years – and was told she might never play it again.

Then she was transferred to the Royal Marsden where three surgeons reversed the stoma last November in an eight-hour operation. Thanks to their care, Caroline is back in action once more with the Band’s busiest programme for years. Still under treatment, she hopes to take up her cello again before Christmas.

And she’s undertaking charity walks for the Royal Marsden. To sponsor her, click here.

« The Rattle Daily: New hall is pie in the sky