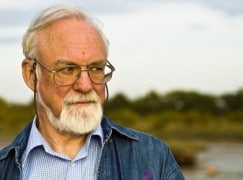 An important British composer has died

We regret to share news of the passing of John McCabe, prolific symphonist, wonderful pianist and inspirational musician. He was 75 and had been in poor health for some time.

Born in Huyton, Liverpool, he attended the Royal Manchester College of Music which had lately graduated Birtwistle, Goehr, John Ogdon and Maxwell Davies. Like Ogdon, he was a polymath, able  to devour all music on sight. Influenced in Munich by Karl Amadeus Hartmann, he wrote a violin concerto for Manchester in 1959, followed by the brilliant Variations on a Theme of Hartmann. John Barbirolli premiered his early works, followed by Sir Georg Solti who conducted his work with the Chicago Symphony Orchestra. McCabe’s major stage works are a two-act ballet Mary, Queen of Scots (1975) and, Edward II (1995).

As a pianist, his greatest legacy is the set of Haydn sonatas her recorded for Decca. Unsurpassed after 40 years.