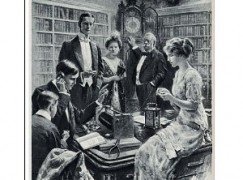 Naxos of America licensed its entire catalogue to Pandora, an internet radio service that is gnawing away at pop and rock radio stations across the USA. Now, it’s into classical. Be afraid. Be more than a little afraid.

Pandora wants your ear time and will trample on existing outlets to get it. The energy is all flowing one way.

Pandora allows listeners to choose the music they like. Personalized stations launch instantly with the input of a single “seed” – a favorite artist, song, or genre. The Music Genome Project®, a deeply detailed hand-built musical taxonomy, powers the personalization of Pandora® internet radio by using musicological “DNA” and constant listener feedback to craft personalized stations from a growing collection of more than one million tracks.

If Pandora wins the classics war, many will say that classical radio was the author of its own downfall. For two decades, stations have been laying off presenters and putting large chunks of airtime into the hands of a central syndicator, eliminating local character and musical know-how. Listener loyalty is probably at an all-time low.

It need not be that way, however. One Texas station is trying to buck the trend (see below). Others should take note before it’s too late.

In Britain, meanwhile, a man with no broadcast experience has taken over as head of BBC Radio 3.

As it approaches its 50th anniversary, Austin’s classical music radio station KMFA 89.5 opted for a little rebellion of sorts.

And that bucks a trend followed by other Texas classical music radio.

Stations in major markets such as San Antonio and Houston have, in the last few years, eliminated nearly all of their local programming and opted instead to broadcast nationally syndicated channels, primarily Classical 24, produced by American Public Media.

KMFA, on the other hand, significantly increased its locally created programming.

Now the station features 22 hours of locally hosted or produced programs on weekdays. And while it kept popular national shows such as “From the Top,” “Concierto” and the live Metropolitan Opera broadcasts, KMFA has dropped Classical 24 entirely, even from the convenient overnight slot.