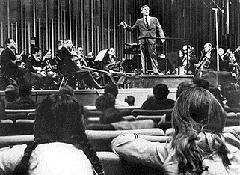 Sanford I. Weill stepped down today as chairman of Carnegie Hall, a post he has commanded with great vigour since 1991.

He is succeeded by Ronald O. Perelman, who has been a trustee for 27 years. Weill becomes president.

You ever wonder why Carnegie doesn’t pack in the kids the way it did in Lenny’s day?

UPDATE: Perelman told the NY Times that ‘he was not much of a classical music enthusiast and would push for the hall to stage more of the pop performances it was known for decades ago.’

NEW YORK, NY—Carnegie Hall today announced that Sanford I. Weill, Chairman of Carnegie Hall’s Board of Trustees since 1991, will retire from this post after 24 remarkable years of service and a total of 32 years as a Carnegie Hall trustee. Mr. Weill will continue to serve as a member of Carnegie Hall’s board, transitioning to a new role as President, a title formerly held by the late violinist Isaac Stern. Mr. Weill is only the second person to hold the title of President since Carnegie Hall was established as a non-profit in 1960.

Ronald O. Perelman, a Carnegie Hall trustee for 27 years since joining the board in 1988 and a Vice Chairman since 2012, was elected today as the new Chairman of the Board of Trustees at a meeting of the organization’s Board of Trustees. He succeeds Mr. Weill as Chairman. Both Mr. Weill and Mr. Perelman assume their new posts effective immediately.

Sanford I. Weill said, “Since my earliest days of being involved at Carnegie Hall, Isaac Stern was an important mentor to me, passing on his passion for this amazing place. The two of us shared a vision for what the Hall could mean one day as an important center for music education and a place to bring people together through the power of music as a universal language. I feel proud to have worked for so many years with the entire Carnegie Hall family to support and advance this vision, and it is meaningful to me to now share this association with him as the Hall’s next President. As always, I remain very excited about Carnegie Hall’s future, and I know that Ronald Perelman, a longtime advocate of Carnegie Hall and my very good friend and colleague, will do a great job as our next Chairman. I look forward to working with him, Clive Gillinson, and the entire team as we continue to forge the path ahead.”

Ronald O. Perelman said, “Carnegie Hall is known around the world for representing the best in music, and I’ve seen firsthand through my work as a Vice Chairman that the strong reputation that it enjoys today is due in large part to leaders in its history like Sandy who have been completely dedicated to fulfilling its mission. It’s a great honor and privilege to serve as the Hall’s next Chairman and to have the opportunity to build on such a strong foundation, working with the board, staff, and everyone who loves Carnegie Hall to envision a future that takes it into its next 125 years and beyond.”

Clive Gillinson, Carnegie Hall’s Executive and Artistic Director, said, “This new appointment appropriately honors Sandy Weill as one of the people who has most contributed to the history and legacy of Carnegie Hall. Sandy’s incredible show of leadership over more than three decades has played an essential role in helping expand Carnegie Hall into the world-class institution as we know it today. We send our heartfelt thanks to both him and his wife, Joan, for the extraordinary personal commitment that they’ve shown over the years as we look forward to beginning this new chapter together.”

Mr. Gillinson continued, “For many years now, I’ve had the pleasure of working closely with Ronald Perelman, a dedicated member of our board’s leadership, a passionate music lover, and someone who is deeply committed to Carnegie Hall. We’re delighted that he has accepted this new role as our Chairman and I’m excited to begin our work together, ensuring that the Hall continues to serve audiences and music in the very best way for many more generations to come.”

Russian maestro, 82, is out of intensive care »