Can an atheist play Messaien?

Paul Jacobs, chair of the organ department at Juilliard and a Grammy-winning Mesiaenist, takes a broad view of faith and the act of performance. But he believes that listening to Messiaen could change your mind about the big questions of life and death. 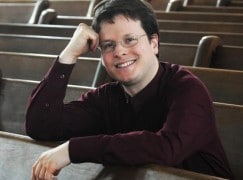 Messiaen’s own beliefs are grounded in a collective worldview that has endured for 2,000 years, inspiring some of our greatest art, literature, and music. Of course, one doesn’t have to accept this worldview, but perhaps it shouldn’t be dismissed as inconsequential to us, either. It might serve as a critical gateway to a deeper understanding of the human condition….

It would be shortsighted to value Messiaen’s music merely for its aesthetic appeal. After all, his professed objective was much grander than this. He longed “to express the inexpressible,” “to touch upon all subjects, without ceasing to touch upon God,” and, by extension, to inspire us to do the same. Messiaen’s message is delivered with a crushing majesty, much like Bernini conveyed in his sculpture, The Ecstacy of St. Theresa.

Our plight is that the hectic, noisy pace of contemporary life drowns out the silences of Heaven. We’re addicted to technological contraptions, enslaved by hyper-busy lifestyles, and endlessly pursue mindless diversions and entertainment, all of which numb us from reflecting upon the most marvelous things. But, just maybe, the shimmering light of Messiaen’s music could move a person enough to investigate the Numinous.