Asterix composer is no more

Gérard Calvi, who won the Prix de Rome in 1945 (where was Boulez?) and his greatest fame as composer of the French TV cartoon Asterix, has died at 93.

He also wrote Le prisonnier de la tour for Édith Piaf and an opera on a Ionesco play but his greatest service was as resident or 20 years of Sacem, the authors and composers rights agency. ‘He engaged in the defence of musicians’ rights,’ said the culture minister, Fleur Pellerin. 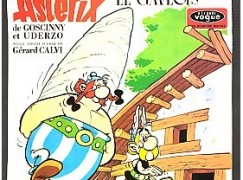