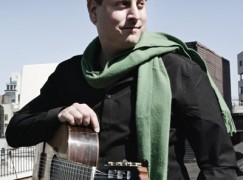 And the solo Grammy winner is…. who?

When the Grammys turns up a big surprise, it is usually a mark of American introspection.

The best classical instrumental solo of the past year, according to Grammy voters, was played not by Lang Lang, Daniil Trifonov, Joshua Bell, Yuja Wang or any of the expected lions. It was plucked by Jason Vieaux, a Cleveland-based guitarist whose biography reports that he has played concertos with 50 orchestras, all of them in the US, and that he records for a niche label, Azica Records.

Maybe this will be his springboard to world fame.

« And the classical Grammy winners are…

Composers and their cats (6) »