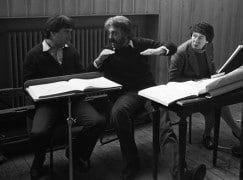 A great Italian director has died

The immaculate director Luca Ronconi, responsible for opera productions at La Scala, Vienna, Salzburg and elsewhere, has died at the age of 81.

Like his French colleague Patrice Chéreau, he divided his life between theatre and opera, not bothering much with film or American fame and seldom putting a foot wrong.

He worked with Abbado, Muti, Chailly and Sinopoli at La Scala on no fewer than 25 operas and staged a memorable Falstaff at Salzburg. In the 1990s, Ronconi ran the Teatro Stabile in Turin.