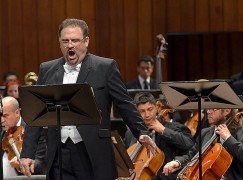 We have been informed of the shocking death of the tenor Carlo Scibelli, a few days after his 50th birthday.

Carlo, a much admired Manrico, appeared at San Francisco Opera, Los Angeles, Deutsche Oper Berlin, Covent Garden and the Teatro Colon. In recent years, he was based in New York.

He was taken to St. Luke’s Hospital on 114th Street and Amsterdam the day after New Year’s in acute pain and diagnosed with pacreatitis. Surgeons removed several gallstones and he seemed to be improving, but the inflammation did not respond to treatment. He died on Friday night of acute respiratory distress syndrome.

Our deep sympathies to his family and many friends.

Chuck went to the emergency room at St. Luke’s Hospital on 114th Street and Amsterdam last Friday, the 2nd and he was diagnosed with Pancreatitis – had seven gall stones removed – they were blocking his pancreas causing tremendous inflammation. It became ARDS (Acute Respiratory Distress Syndrome) He had trouble breathing and he was taken to ICU where they put him on a respirator and kept him heavily sedated so that his lungs, which were affected would heal and so that the inflammation would go away. His buddy Jon Rosen stayed with him almost continually – I joined him on Monday. We watched his ‘numbers’ go in the “right direction” but always were reminded by the doctors and nurses that “he’s not out of the woods yet.” Still, all was looking up until Thursday, the 8th when his fever shot up to 105 and 106.3 (not a typo) Anti-biotics had no affect because the cause was not infection – it was from the inflammation that we all hoped and prayed would subside. It didn’t and by Friday, January 9th, despite incredible care by the doctors and nurses, Chuckie’s blood pressure dropped dangerously low and all other organs began to fail. He was surrounded by family and friends when he passed at 8:57 PM that evening. It is beyond heartbreaking and also heartwarming to see so many people feeling such grief and love for Chuck. He will be cremated and brought to California where his mother lives and near his nieces Kelsey, Carly and Natalie and brother-in-law John and, where his beloved sister, Suzie is buried. His son Jordan is nearby in Seattle. Soon, in another month or so we will have a Memorial for his New York friends and family to honor and celebrate the man we all loved so much. Please know that any and are welcome. The only thing required is a love in your heart for Carlo…

A song for the late Anita Ekberg »