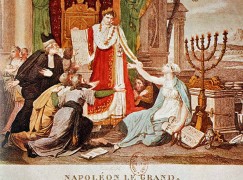 To be a Jew of France

I have written an account of my family’s engagement with France as an op-ed in today’s Daily Telegraph. You can read it here.

My perception is that the transaction by which French Jews embraced the Republic in exchange for liberty, equality and fraternity has reached the point of breakdown.

A slightly longer (and more music-referenced) version of the article appears below. 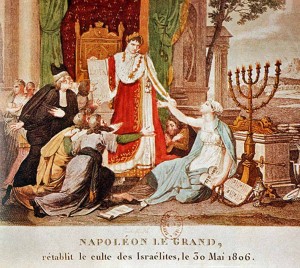 In January 1992, I took my Uncle René to the Bastille. It was our last opportunity to go to the opera. René was about to join his daughter in Israel, ending three centuries of our family’s existence as French Jews – Jews who were as meticulous in their religious devotions as they were proud of their Republican heritage.

Our family lived in the ninth arrondissement and went to the opera at old Palais Garnier, a chandeliered relic of French pomp. René did not think much of the concrete Opéra Bastille. When I asked why he was leaving France, he said: ‘c’est terminé.’

For him, the glories of France were dead by 1992. The rift between the Republic and its Jewish citizens did not begin last week with Islamist attacks on cherished freedoms, on innocent families out shopping for the Sabbath. It has a longer history.

How proud was my family of being French? We trace our lineage back to the dawn of citizenship records, to 1727, in a village on the outskirts on Strasbourg. Our patriarch was Grand Rabbin of the Lower Rhine, the first Jewish preacher to deliver sermons in French. When the Germans occupied Alsace-Lorraine in 1870, we moved en masse to Paris. My ancestors were never going to live under any flag but the tricolor.

We founded an orthodox synagogue at the back of the Folies-Bergère. My Aunt Fifi would giggle as we passed display cases of half-naked entertainers, whispering to me what went on in there. A wooden board in the rue Cadet synagogue lists members of our family who gave their lives for France – who ‘fell on the field of honour’ in the Republican phrase – more than 20 at my last count, most in the First World War.

Aunt Fifi, born on August 2, 1914, would never marry; most French Jewish men of her generation were exiled or exterminated. The day she was born, my grandfather went off to the front, serving for the full four years, never omitting to wrap a Jewish talit around his French uniform at morning prayers.

In the Second War, a great-uncle, Samuel, was shot dead in the street by a German soldier. Other relatives were deported to death camps. My grandparents fled south, surviving by luck, wit and the kindness of strangers. Uncle René went underground with the Résistance. Peacetime or war, our loyalty to France was absolute.

I can barely imagine how their loyalty survived the Dreyfus Affair, when a Jewish army officer was falsely prosecuted for espionage, or the 1930s when large sections of French media promoted Nazi prejudices against Jews. But survive they did. For us, being Jewish and French are inseparable strands of identity. Our family tomb is in Montparnasse, at the very heart of French culture.

We embraced the Republic even when it impinged on core beliefs, requiring Jewish children, for instance, to attend school on the Sabbath day. We accepted the centrality of the state in exchange for its celestial values: liberty, equality and fraternal dialogue. The dogmas of the Republic were our guarantee of tolerance. We participated in the life of France, its culture, its economy. Some distant cousins became Christian; one is married to a Moslem. We were part of France until France ceased to be France.

And then we left.

Waves of North African immigration from the 1960s on were not a cause of our discontent. Those waves contained many Jews. Uncle René, annoyed by a young Israeli rabbi, stormed out of rue Cadet to form a new community with Moroccans and Tunisians. For a while, Paris seemed friendlier than ever and Jews a vital part of its élan. Bernard-Henri Lévy and Alain Finkielkraut, two popular TV philosophers, are avowedly Jewish. A celebrated bass-baritone at the Opéra, Laurent Naouri, belongs to a family of kosher supermarket owners.

But an alienated populace in the outer suburbs, ignored by the Republic and exploited by radical preachers, made Jews uneasy. Some streets were no longer safe to walk in a skullcap. Anti-semitic rhetoric was heard on the political right, on the left, and from the banlieus. Murderous attacks on Jewish schools aroused no national outrage on the scale seen in the past week. Economic decline accentuated the need to leave.

Jews fled in thousands – many to London, where two new communities have sprung up in my own neighbourhood. Some 3,300 left for Israel in 2013 according to official figures, rising to 5,000 last year. Many more acquired homes abroad.

France awoke too late to the exodus. Last September, the prime minister Manuel Valls, whose violinist wife is Jewish, put on a skullcap at a central synagogue and announced to the world that ‘a France without Jews is no longer France.’

This weekend, for the first time since the Nazi era, that same synagogue had to shut for the Sabbath because the state was unable to protect its worshippers. France is in a state of moral confusion. Yesterday a million marched in Paris and the impressive M. Valls declared: ‘We are all Charlie, we are all police, we are all Jews of France.’

How I long to believe that. My Jewish friends were out on the streets of Paris this weekend, hoping that, from this tragic moment, the tide will turn. Myself, I scrapped plans to attend the opening of the new Philharmonie on Wednesday, unable to pretend that life will go on as before. My history, as a Jew of France, is over.

« A chanson for Charlie Hebdo

A singer with a cold: Do I go to rehearsal? »