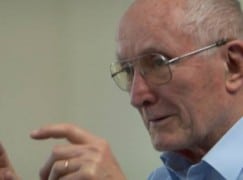 Notice from the Swingle Singers:

We are profoundly saddened by the news that our founder, friend and mentor Ward Swingle has passed away at the age of 87. Ward was an inspiration to so many in the vocal community and beyond. As an arranger, composer and vocalist he redefined what singers could do, made us hear music in a new way and brought us so much joy. It has always been an immense honour and privilege to perform under his name. Even long after he retired from the group Ward was incredibly supportive of the current Swingles, always excited to hear about our latest projects and encouraging us to take risks. His passing is a huge loss and our thoughts are with his family at this very difficult time. Thank you, Ward, for everything you have given us.

Alabama  born, Ward played in big bands, studied at the Cincinnati Conservatory and went to Paris in the early 1950s as a piano pupil of Walter Gieseking. Then he had the Swingle idea. His lead singer, Christiane Legrand, was sister of the film composer, Michael Legrand. Nobody had tried jazz on Bach. It was a huge hit, very much a soundtrack of the Sixties, of our lives.

« Concert for a penny