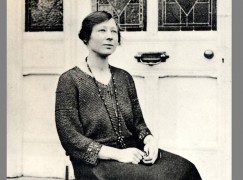 So whose cook did Elgar get pregnant?

Ismene Brown relates a fascinating memoir on the Spectator site of a wild gooseberry chase she went on after the late Michael Kennedy dropped hints in her direction that the great composer had a love child with another man’s cook. Ah, but there were two cooks with the same name.

It’s a fabulous, tangled tale of journalistic derring-do and a wonderful read for the weekend. Click here.

What it called to mind was the tip-off I received, some 30 years ago, from a godson of Elgar’s, that led me to track down the missing person in the Enigma Variations to the conservatoire in Leipzig, and later to New Zealand. It made the front page of the Sunday Times.

Name of Helen Weaver. Here she is.

« Orchestra’s banker is honoured by the Queen