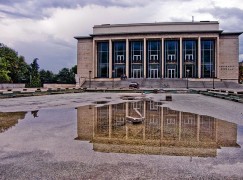 The Moravian city of Brno, population 400,000, has a Beethoven-sized philharmonic orchestra and a very good concert hall. If it wants to do the ninth symphony or anything larger, it has to use the opera house, which is named after the city’s most important musician, Leos Janacek.

The Janacek Theatre, somewhat showing its age, is perfectly serviceable for opera, but the acoustics are not right for concerts.

Today the city told the Brno Philharmonic Orchestra that it can have the funding needed to build a new hall, probably some £27 million. Mikel Toms, who conducts there a lot, is thrilled.

London (population 8 million), on the other hand…. oh, don’t go there.