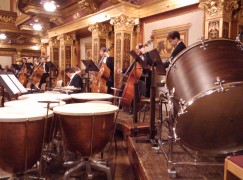 We have received more than the average torrent of cynical abuse this year in response to our articles and observations on the Vienna Philharmonic New Year’s concert.

Unlike these tunnel-visioned respondents, Slipped Disc tries to see both sides of most stories. We report verbatim the claims by Vienna Philharmonic directors that they are trying to practice equal opportunity employment and we record with regret their repeated failure to do so.

We have no axe to grind against this excellent orchestra. We have friendly contacts with several of its members.

However, what is wrong remains wrong, no matter how beautiful it sounds. An orchestra that selects just five or six women players for its greatest showcase is making a statement about its identity.

If discrimination against women and minorities is an offence in the sight of God and law, then the VPO is a flagrant, persistent offender. It must change its ways or face the condemnation and disgust of civilised humanity.

If, on the other hand, you happen to think discrimination is right and reasonable and ought to be ignored, please leave this site. You are, in the classic Viennese phrase, nicht erwünscht.

Maestro and concertmaster announce their engagement »