The viola player and conductor Yuri Bashmet was summoned to be congratulated on his birthday. 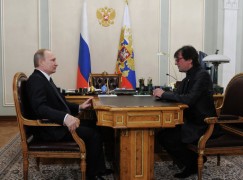 At their meeting in Novo-Ogaryovo, Putin officially said: ‘I want to congratulate you on your birthday. Thank you very much for your work, especially with children. You do much that few people see.’