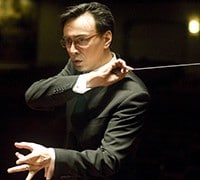 Masur junior steps at at Boston

In his first break as assistant conductor of the Boston Symphony, Ken-David Masur takes over the coming weekend’s concerts from flu-stricken Tugan Sokhiev.

In his first subscription concerts as BSO Assistant Conductor, Ken-David Masur will lead the Boston Symphony Orchestra in a program of works by Berlioz, Saint-Saëns, and Rimsky-Korsakov, substituting at the last minute for Ossetian conductor Tugan Sokhiev who has had to withdraw from his BSO appearances due to illness; the flu and a sinus infection have prevented him from traveling to Boston this week.

A really bad hair day at the Met »