The Norwegian trumpet virtuoso Tine Thing Helseth has abruptly pulled out of a North America tour. Promoters have been told she has ‘cancelled all her concerts for the next few months because of exhaustion.’

There is no mention of this on her site, or her agency’s. In her last tweet, two weeks ago, she was looking forward to the US tour.

Tine, 27, shot to fame with stunning tone and an appealing personality. We wish her a swift recovery. 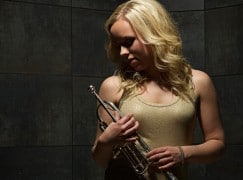 UPDATE: Tine had posted this on her Facebook page:

Hi everyone,
Some of you may have seen that I’ve had to cancel my concerts for the next few months. On my Doctor’s orders I have been advised to take some time off. I had really been looking forward to these concerts and this is not a decision I’ve taken lightly. I’m hoping to be back soon.
Thanks so much to those who have expressed concern about my well-being! It really means a lot to me to know that I have your support.
All the best
Tine x