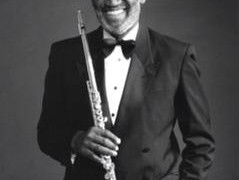 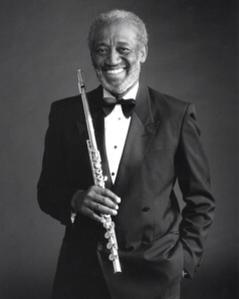 Born in Chicago Illinois, Harold Jones began his musical education as a violin student at the age of ten, but when he heard another student play thepiccolo, he decided that the flute was the instrument he wanted to play. He studied flute with David Underwood while attending Dusable High School in Chicago. He then became a member of the Chicago Civic Orchestra under conductor George Schick.

Mr. Jones came to New York in 1955 and was awarded a scholarship to the Juilliard School of Music, where he received the “Outstanding Woodwind Player” award prior to graduation. He continued his studies with the renowned Marcel Moyse and in 1966 made he New York recital debut at Town Hall, later appearing at CAMI Hall, Alice Tully Hall, Lincoln Center and at Jordan Hall in Boston. He has been soloist with numerous orchestras, including: The Bach Aria Orchestra, The New York Sinfonietta, American Symphony Orchestra, Brooklyn Philharmonia, National Orchestral Association, Municipal Concerts Orchestra and Symphony of the New World. He has appeared frequently with Today’s Artist in New York, San Francisco and at the Yachats Music Festival in Oregon. Mr. Jones has performed in recitals across the country as well. As a recitalist and teacher he participated in the 1988 and 1989 Manhattan School of Music International Summer Youth Festival in Taiwan. Mr. Jones was honored at a performance in Jackson, Tennessee, where he was presented with the Key to the City by the Mayor.

Mr. Jones was on the faculties of Westchester Conservatory of Music, Manhattanville College and he is the past president of the New York Flute Club. Besides his busy solo performance schedule, he also collaborated with the prize winning Audubon Quartet, the Fresk Quartet, internationally renowned pianist Leon Bates and guitarist Peter Segal. He recorded the Vivaldi flute concerti for the Library of Recorded Masterpieces and has four solo albums to his credit, on Antara Records: “From Bach to Bazzini”, “Afternoon Fantasies”, “Let Us Break Bread Together” and “This Little Light of Mine.”