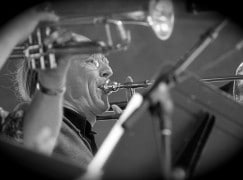 ‘It’s like driving a car through rush hour’: London trombonist has died

Born in Llandybie near Ammanford, South Wales, in 1929, Derek won the Trombone Solo Competition at the Welsh National Eisteddfod three years in a row. In 1955, he joined the Royal Opera House Orchestra, in 1964 the London Philharmonic, and in 1981 the Royal Philharmonic Orchestra.

Here are his tips for young players.

« What shall I wear? A concertmaster recommends…

Anagram of the day »