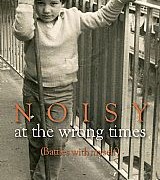 It was the rugby coach who got me into opera…

Michael Volpe, director of London’s Holland Park Opera, has a memoir coming out shortly on his rise from ‘a backdrop of nuns, hit men, gangsters, rugby and ice-cream’ to the summits of vocal art.

Noisy at the wrong times is a lesson for our times when inner city children from poor backgrounds are written off, when cultural education is diminishing and aspirational leadership is little more than a platitude.

Doc Thornberry was a legend.  He was the first rugby coach any of us had and he had taught hundreds of boys at Under Twelve’s. In fact Doc wasn’t much bigger than the eleven year olds he taught to play rugby. Doc also taught English and it would be fair to say he was one of the most radiant and inspirational teachers I ever had. He was unorthodox too, leaping up onto the desks and walking from table to table as he elucidated on some book, text or poem. He was transfixing, speaking at volume, then a whisper, eyes wide open, hands pressed into gesticulating action, but if your attention wandered, Doc would spring leopard-like across the desks, grab you by the hair and shake you senseless as he continued to recite Shakespeare or Keats. He wore Doc Marten shoes (hence the nickname) and these helped his balance, the cushioned soles offering rudimentary suspension as he bounced across four desks to his target. In the seventies, we all had long hair but Adebola didn’t. He wasn’t interested in Afros and kept his hair cropped short to his head, so when Doc leapt across to his desk one day, he scratched away at Adebola’s head trying to get purchase on the hair that wasn’t really there. After a short while of trying, he took hold of his ear instead and shook him by that. I often think of that little vignette as a metaphor for my school life – when shaking me one way didn’t work, somebody tried something different.

Doc was just as inspirational as a choirmaster, but I never saw him shake anyone by the hair in rehearsals. I don’t recall how I came to be in the choir – I must have auditioned – but I was a member of the junior choir in the first form so I was singing throughout my school career.  I was only marginally less attentive and dedicated to music than theatre, enjoyed singing  immensely and in my senior years I recall performing in various sections of the choir ranging from second tenor to second bass, so my range was acceptably wide. Our programme was challenging and varied too and we gave concerts not just to the school but also to the community at large. Doc had a remarkable ear for voices and could spot a flat note from a thousand paces when he would suddenly crouch low and stare, pointing accusingly at one section of the choir.

“Everyone stop, stop! First basses, on your own, quick!”

Having narrowed down the section, he would set about singling out the culprit until one poor soul would be singing solo, sounding just like the drain Doc had heard above the din of forty other voices. Being that person was unpleasant because a flat note sorely tested Doc’s patience and he would make you sing the part repeatedly until he was satisfied you had mastered it. I’m bound to say that the choir could sound magnificent and it’s peak for me was the performance of Handel’s Messiah when a local girls’ schools and other choirs joined us to provide the full range of voices required for the piece. We really let them have it with that one.

Despite the choirs at Woolverstone, it had become musically less ambitious than it’s earlier years.  Weber’s masterpiece Der Frieschutz is a complex, beautiful opera but requires considerable vocal and orchestral forces, not to mention complicated staging since magic and all sorts of nonsense is involved.  It provides a huge challenge for any professional company, but I was astonished to discover, on looking through some Woolverstone archives, that the school had produced the opera in the early sixties. Along with it, they had also performed some Britten (the composer actually visiting the school to see the production), Mozart’s The Magic Flute, Verdi’s Requiem, Menotti’s Amahl and the Night Visitors, The Mikado and even Smetana’s The Bartered Bride.  These are hugely ambitious pieces but I’m not sure why they stopped – the rugby choir was the rump end of what had been a glorious musical and theatrical history.  In 1962 alone, the school mounted productions of Bertolt Brecht’s Mother Courage, the aforementioned Smetana opera and finally George Bernard Shaw’s play of Androcles and the Lion.  Other years were as equally challenging and remarkable. Perhaps the swinging sixties brought about the demise of such high classical endeavour but the school certainly continued to produce with seriousness, classical music and theatre. It must have required huge dedication and commitment on the part of masters too, in particular the music teacher Barry Salmon, although having the boys in school twenty four hours a day must have helped a bit. To bring young boys like us to the doorway leading to such high classical art is unimaginable today I feel. It is likely the boys involved never realised that when they took on Frieschutz, they were producing one of the great German operas of all time, but they would come to appreciate their enlightenment later in life. That was Woolverstone: anything and everything was possible and I can imagine the masters sitting down to devise the latest theatrical or musical wheeze, nobody wasting time wallowing in their cleverness.

I would wallow at the first opportunity even when signs of cleverness were thin on the ground so it’s easy to imagine how insufferable I could be.  I thought I was clever at just about anything I turned my attention to and there was little anybody could do to dissuade me from thinking that, given the chance, I could have run the entire school better than the incumbent lot.

On stage, I could indulge all sorts of haughty, high stepping self-glorification and nobody would criticise me for it.   Theatre and everything attached to it was my academic high point and it was where the dull, hard, battleship grey of my educational prospects took on a patina in which you could see the bright lights reflected.

« German orch on brink of insolvency

How Stephen Sondheim came out of the Woods »