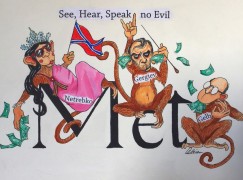 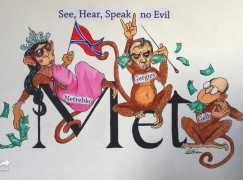 We have been given first sight of the poster for the coming picket of the Met’s January 26 production of Tchaikovsky’s Iolanta.

NYC arts managements have turned a deaf ear and a blind eye as they continue to hire Russian artists who publicly parade their support for Putin’s wars, invasions, terrorism and his anti-gay policies. While the rest of the world condemns these despicable acts, Met Opera announced they “support” Anna Netrebko and are “proud” she sings at the Met. Ms. Netrebko had staged her so-called “donation” to the internationally wanted terrorist, Oleg Tsarov, via a mass media attempt to validate and endorse Putin’s invasions.
Another poster-child of the Met Opera, conductor Valery Gergiev was a signatory of the public letter of support for Putin’s military invasions in Ukraine. Mr. Gergiev continues to deny gays are persecuted in Russia, and he consistently defends Moscow’s bloody occupations of her peaceful  neighbors, Georgia and Ukraine. Met Opera GM Peter Gelb responded with silence as did BAM and Carnegie Hall, where Gergiev also performs this month.
Why is this “speak no evil” policy of the Met, Carnegie Hall and BAM so objectionable?
Tens of thousands of human lives, wholesale destruction of cities and countrysides, hundreds of thousands of refugees – all sacrificed due to Russia’s needless colonial expansion. When we hire propaganda mouthpieces like Gergiev and Netrebko or buy tickets to hear these artists, we in effect support these terrorist activities.…New Yorkers are a civilized people. New Yorkers are not “proud” of Netrebko and Gergiev, nor do they “support” the killings of thousands of people. New Yorkers will not honor any performers who hide behind “tolerance” to propagate their own barbaric views.