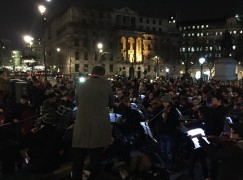 Exclusive report: London’s orchestra on the Square for Charlie Hebdo

More than 150 musicians turned out last night at a few hours’ notice, alerted by Slipped Disc and other social media, to play Samuel Barber’s Adagio on Trafalgar Square in memory of the innocent victims of the Paris massacre. They came from all over London, some from way beyond London, to voice together their sympathy and their outrage. The performance was led by the violinist, Thomas Gould.

Here is an exclusive report from the organiser, Vanessa Lucas-Smith, cellist of the Allegri Quartet.

photo(c) Thomas Bowles
Having played on the stage of many prestigious concert halls around the world it is hard to remember a performance that meant as much as tonight’s. Perched on a wall, four to a stand and freezing cold, there was only one work on the programme – Barber’s Adagio for Strings. Having fretted for most of the day as to how many would turn up and play at only a few hours notice – 150 did, at a conservative guess. (Lesson learnt – have more faith in humanity). 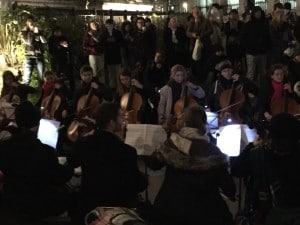 These are passionate, caring and generous people, never mind the impressive list of accolades between them (a BBC young musician of the year, orchestral leaders, international chamber musicians). It really is not the point. We were united in cause; one of remembrance, of the shock and horror of the brutality of the Charlie Hebdo massacre, of sadness for the victims and their friends and family and of the determination to stand up for democracy and freedom of expression. Living in these times we need as many reminders as are possible that most people act with love, kindness to others and with generosity of spirit.

And now with added video of the performance. Click here.

Have they cracked the secret of perfect pitch? »