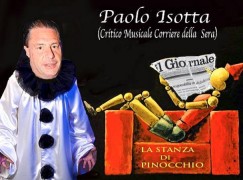 The denial of access by Opera Australia to two prominent critics has sparked discussion the world over on the nature of the relationship between a state-funded opera house and a vigorous free media.

Valerio Tura, former artistic director of La Monnaie, think there should be a cordon sanitaire between the two sides. He writes to Slipped Disc:

In the best of possible worlds, critics (music, theatre, cinema, arts exhibitions, pop, rock, etc.) should have tickets paid for by their papers, and perhaps attend the shows incognito, as Michelin guide writers are supposed to do when they review a restaurant, paying their bills.

However, we do not live in the best of possible worlds. We live in a world where a degree of compromise is the norm. The issue is to what extent the compromise is acceptable and sustainable. My answer is: up to the point where the deal is reasonable, mutually accepted, and – most important of all – declared.

And, I’m afraid, when the deal is broken, the organisation (opera house, tour operator, fashion designer, restaurant) has the right to refuse favours.

Some time ago the Teatro alla Scala started refusing complimentary tickets to Paolo Isotta, music critic of the very important Milan-based newspaper Corriere della Sera, who was evidently following his own agenda of bashing Scala policy in every way. I have not always been a fan of Stéphane Lissner, the Scala intendant, nor did I always find his artistic policy good, but in that case I thought that he was totally right.

The bottom line is that completely independent journalism is a utopia. A degree of manipulation has always existed. And will continue to do so.

The bottom line is that George Orwell’s maxim, quoted by Deborah Jones – ‘Journalism is what people don’t want to see printed, all the rest is advertising’ – is still valid.

We contacted La Scala today to clarify the position. A spokesman for the company says it stands by its past decision to refuse tickets to Isotta, who (among other vituperations) had written that Claudio Abbado was not a proper conductor and that another guest conductor had made Wagner sound homosexual. After a public exchange of letters between Lissner for La Scala and the Corriere editor in February 2013, the newspaper decided that it would refuse free tickets in future, paying itself for any critics or writers who attended any theatre. The newspaper maintains that practice up to now.

However, La Scala’s new administration, led by Alexander Pereira and Riccardo Chailly, told Slipped Disc today that, in future, no-one will be considered persona non grata at the theatre. That includes Paolo Isotta. He is welcome to request free tickets.

This seems, to us, a reasoned and sustainable position.

« The much misunderstood Mr Mendelssohn

What a Stradivarius viola sounds like on breakfast TV »