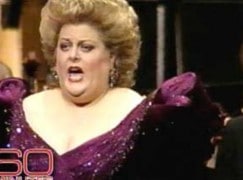 Diva’s tales: I binged on food. Then booze. Then men.

Deborah Voigt has been spilling more of the beans. In an interview with People magazine, one of whose writers ghosted her forthcoming memoir, the soprano describes what happened when she stopped overeating.

“My drinking just escalated,” she tells PEOPLE. “It would be nothing for me to go through two bottles of wine, then my blackout would happen sometime around the third bottle.”

Through therapy, she learned about how one addiction can lead to another. Men came next: for a brief time, she even frequented websites for men who wanted “big gals.” “The whole idea of being able to attract a man was so new to me,” notes Voigt. “It was like, ‘Could I?’ Lo and behold, I could, and it was like feeding the monster.”