The deal is not as simple as it looks.

Angel is managed by Emma Hawkins at The Music & Media Partnership, a branding agency that works for David Garrett, Russell Watson and Cliff Richard.

They are not equipped to manage a developing operatic career. That’s where AH comes in. Toi-toi. 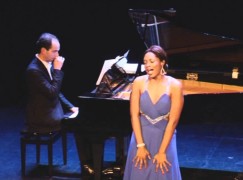 Watch her with Melvyn Bragg here.