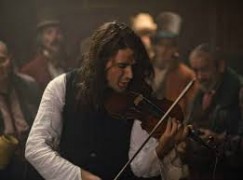 The German-American violinist’s biopic has just opened – to appalling reviews.

Variety: Providing a performance that’s so wooden and unconvincing that his director habitually cuts away from his face during dialogue — the better to mask the awkwardness of his line deliveries — Garrett proves a washout in this formulaic period piece, whose minimal commercial prospects are unlikely to extend beyond the star’s most rabid fans.

New York Times: Even if, like me, you’re a sucker for men with tossable hair and precision eyeliner, you can’t help noticing that “The Devil’s Violinist” is hysterical — and possibly historical — hooey. More bodice-ripper than biopic, this German-Austrian coproduction about the life of the Italian violinist Niccolò Paganini is so magnificently misjudged that it almost defies description.

The Hollywood Reporter: ‘This drama about famed 19th century Italian violinist Niccolo Paganini suffers from the casting of David Garrett in the lead role. While the popular violin virtuoso certainly has the musical chops and darkly handsome looks to credibly portray the early rock star musician, his wooden acting fatally sinks the project.’

And more in the same vein…

Israel Yinon’s daughter: He died doing what he loved best in the world »