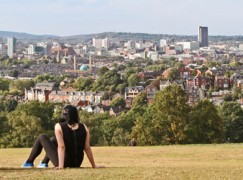 Concert for a penny

That’s what it takes to tempt an audience in Sheffield, capital of the UK’s defunct steel and coal industries. Press release below.

Do you have a case of the January blues? Would you like to try something new but don’t have the cash? Sheffield’s chamber music organisation, Music in the Round, is inviting audiences to experience the magic of its in-house ensemble, Ensemble 360, for just one penny on Saturday 24 January.

Following the huge success of the first such concert in 2012, the concert will once again be held on Sheffield Crucible Theatre’s 980-seat main stage. The programme features music of theatrical flair that showcases the collective and individual brilliance of resident Ensemble 360 musicians. They will be playing orchestral favourites in skilful chamber versions, and a selection of more recently composed pieces that are full of spontaneity, wit and charm.

The concert programme will include Mozart’s Don Giovanni Overture (arr. David Matthews), and Ravel’s virtuosic Tzigane for violin and piano, as well as something more unusual in the shape of Ligeti’s fabulous Musica ricercata / Six Bagatelles for piano and wind quintet, from the 1950s. Ligeti originally wrote these 11 pieces for piano, and he later re-arranged 6 of them for Wind Quintet. In this concert, these two versions will be mixed for possibly the first time ever, with pianist Tim Horton performing 5 the pieces which Ligeti never orchestrated, with members of Ensemble 360 playing the Wind Quintet version of the others.

« When the Met paid respects to a man from the moon